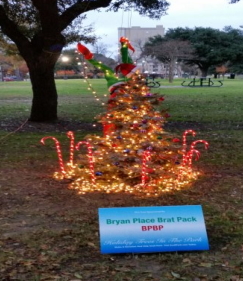 January 2016 Yard of the Month

We are starting the new year by celebrating the Holiday Trees in the Park as our Bryan Place Neighborhood Association Yard of the Month.

The Friends of Exall Park outdid themselves by having 10 trees lighting the Hall Street path this year. Holiday Trees in the Park have become an annual event that brings our neighborhood together and sprinkles holiday spirit on all who visit Exall Park.

Starting from Bryan Street moving toward Live Oak Street, trees were sponsored and decorated by

Home Depot was an Event Tree Sponsor and Baylor Scott & White was also an Event Sponsor.